This version of home-made pizza is doughier, and with more topping, but very good on it's own in a different way. It consist of 4 types of cheese. Mozarella, Parmesan, Cheddar and Camembert! Yumm~!!!


How would I describe this?

It tastes like a slice of melted cheese with a slight crisp to it. The cheese is so good. A little salty with a gooey satisfaction. The zetsy flavor of the tomatoey taste blended so well with the bread dough. The crust is slightly salty, fluff and crispy at the bottom. It's awesome. And the cheese sausages that I added on it that adds a whole another dimension.

Oh! I almost forgot my plate of fresh salad and a big cuppa ice-cold Ribena!

I'm sorry man, a slice of real cheesy pizza would be like a slice of heaven to me. I love my Sunday lunch! 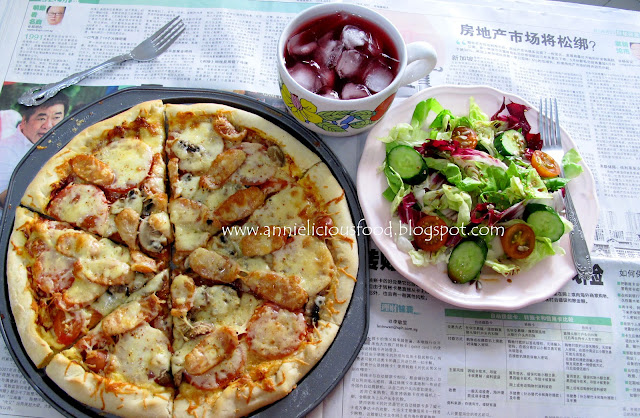 The thing about a pan of delicious pizza is that the pizza crust must be good, and the topping must be from fresh ingredients. I feel bad about using canned tomato paste. But sometimes I really gotta heck it! Haha!

For those friends who knows me well, I'm a big fan of Nigella Lawson. She's one of the best and most influential of British food writers. This time, I followed the pizza crust recipe from Nigella Lawson's Pizza Casareccia. But for the topping, I just do it freely on my own. 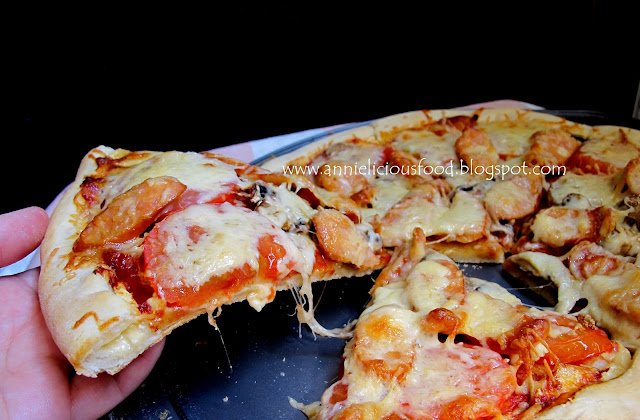 Although you don't see a real thick layer of cheese on the pizza, because I control the amount of cheese I put. It's sinful you know? :(

So, here's the cheese for the pizza. I purchase those cheeses in a block, and I grated them myself. As much as I could, I'll try not to purchase readily grated cheese. For cheddar, it depends. I do purchase them in block, and sometimes in slices. I have some left-over cheddar cheese slice in the fridge. So, I'll just use it. 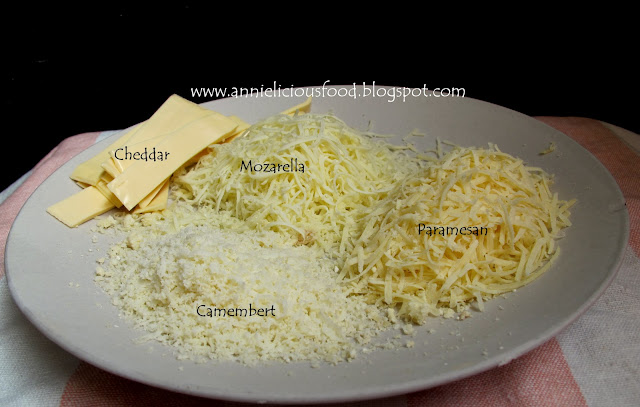 Incase you are confused with all the cheeses. Here, read this...

Cheddar
Everybody eat cheddar cheese. The most common ones are Cheesedale, Kraft & etc brand that we usually seen in asian supermarket. Those are good for general sandwiches. Cheddar is rich with a tendency to melt in the mouth, the flavour full and fine. But if it is a good quality cheddar, it tends to have a sharp, pungent flavour, often slightly earthy. To me, Cheddar and bread is a perfect combination!

Mozarella
A mild semi-soft Italian cheese that has a rubbery texture and is often eaten melted on pizza. Good quality fresh mozzarella is generally white. But may vary seasonally to slight yellow. Those that general stores selling ones are usually slight yellow in color. Having mozarella on pizza is a must! No mozarella, no pizza. Hehe..

Parmesan
To me, Parmesan is a hard, sharp, dry Italian cheese that usually served grated as a garnish on top of my pasta or pizzas. I love it's sharp flavour. I think this is one of the important topping for all Italian dish.

Camembert
The cheese itself is really soft and runny and strongly flavoured as it ages. I love it very much. People normally eat it uncooked on bread, burgers, with wine or meat. Just like Brie, the subtle flavour and texture do not survive heating. That is why I always freeze the whole block of Camembert and grate it later. By doing so, I could prolong it's shelf life too.

Okays! I'm done with my cheese.

Now, you could prepare some basic ingredients of your preferred choice. Fresh seafood, ham, chicken or whatever you want. It's really up to you. I use whatever I have in the fridge. Those standard stuffs but it will never goes boring. Fresh tomatoes, my all time fave white button mushrooms, and since I'm gonna make cheesy pizza, it must be cheesy sausage this time! 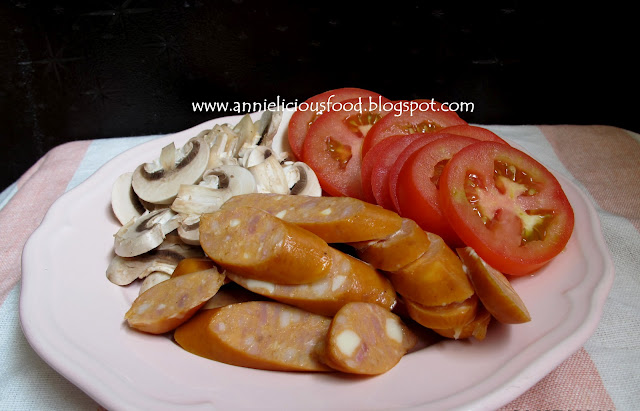 for the dough:
for the topping (Quadruple Cheese):
It's slightly different this time. Other than the additional existence of Cheddar and Cheese sausages, I doubled up the fresh tomatoes, and I reduced abit on the white button mushroom.

b)  Use fork to poke some holes on the crust, apply a layer of olive oil on top, and put it into the oven for 15mins, or even upto 20mins if you wants your bread dough to be more crusty. It's like, until the dough has a hollow sound when knocked. It's up to you, because it can be quite individual when it comes to the crust level that you are looking for. I only baked mine for 15mins, and I think it is fine.

c) Once the crust is out of the oven, apply a layer of tomato paste on it.

c)  Add in tomatoes in sequence and the rest of the ingredients.

d)  Sprinkle the cheese generously on top and put the pizza back in the oven and cook for a further 5 to 10 minutes or until the cheese has melted and the base is crisp.

Once it's out of the oven, it is advisable to let the pizza rest for 5mins before you start cutting em'. 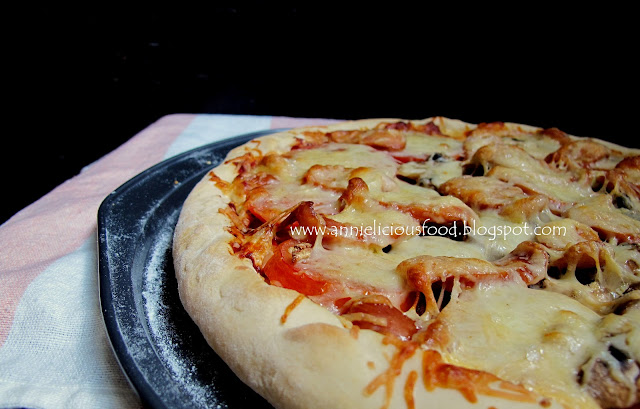 But I know you wouldn't be able to wait for 5mins to cut it. I don't have such patience, and I don't pretend to be one.

You want a slice? I'm sure you want. 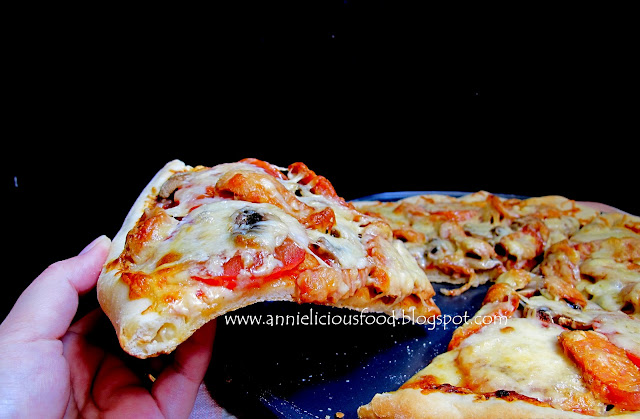 Did you see the cheddar cheese at the side of the pizza? 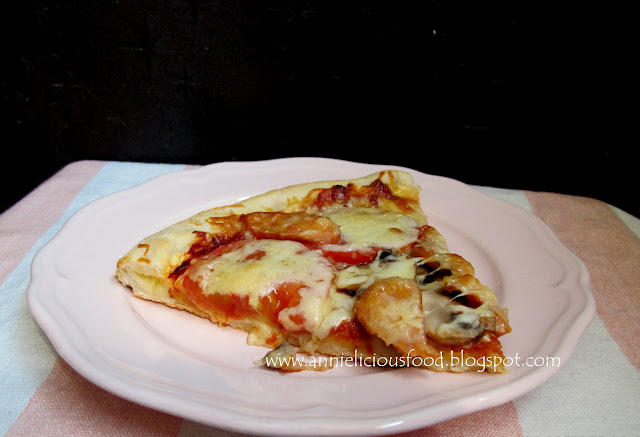 I'm seriously considering if I should get a pizza stone. If I have pizza stone at home, I believe the pizza will be even better! :)

With this homemade pizza recipe, including pizza dough and toppings, step-by-step instructions with photos. I can't find any reason why you can't make your own pizza at home.

It's true! You never try, you won't know. Max swallowed 3 big slices of the pizza! When I see the way he eat, happily, just like a big child, and I know that home-made pizza is really good :)
Posted by Annieliciousfood