This is one of the quick weekday dinner that I cooked after a hectic work. Home late to a bare fridge and a rumbly tummy. Sigh!

Ahh... Comforting Prawn Broth Spaghetti, with Prawns and Fish Fillet of course. This warm and fragrant broth can be whipped up in no time from ingredients I'll already have in my cupboard or freezer.

If ever there were justification for cupboard love, this would be it; a full-on dish thrown together to enormous effect, simply with ingredients that you can more or less keep on permanent standby. And, like so many of the recipes that I have, it's pretty well instant. I do not have the luxury time to go and shop for fresh ingredients everyday. Hence, keeping some frozen food in the fridge is always good. Fish fillet and prawns are the common ones. While for dried food, I always make sure I have some spaghetti or Asian style dried noodles in the cabinet. 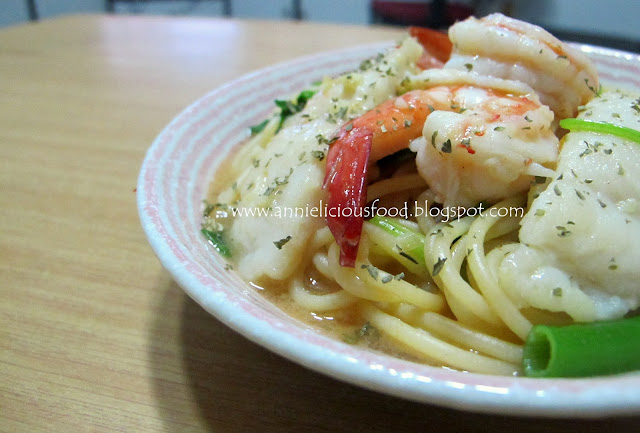 1. Cook the spaghetti according to the packet instructions. Drain the noodles, set aside.

2. Clean prawns and devein them - Wash the prawn before you start doing so. Separate the head and the body, peel off the shells. Make sure that you do not break the body while doing so. Keep the head and shells. We need them later. Cut through the back of the prawn to reach the black vein. Remove it since it is inedible. Wash with water, drained, set aside.

4. Heat the oil in a medium-sized heavy based pan. The one you can toss the cooked pasta into later. Olive oil in a pan, chopped garlic, fry till fragrant. Add in prawns and fillet. Gently pan-fry it. Once it is cooked, or lightly caramelized with the garlic, you could dish it up.

5. Spaghetti on the same pan, give it a toss, add in prawn broth. Give it a stir. When it start simmering, add in spring onions, coriander, salt & pepper. Toss well.

6. Add in the Prawns and Fish Fillet in, gently toss. Don't toss it aggressively. Unless you wanna break your fish fillet into small pieces. Heat off, dish up. Sprinkle with some parsley flakes and serve.

It's not meant to be too soupy. How should I say? It's supposed to be a wet stir-fry maybe? Yea.. The amount of the Prawn Broth must not be too much. It should be good enough to make you finish up the spaghetti and make you drink up the last drop of the broth :)

This is another instance of how your freezer can be your friend in forgetful times. If you haven't remembered to go shopping or haven't got time, energy or inclination, this is for you. There's totally nothing wrong to keep some frozen seafood in your freezer. I buy them fresh, and freeze them. It could save your day. After all, if you haven't got time to shop, it's hardly likely you'll be able to spend many hours at the cooker. Right?